Here is how the chain of symptoms looks like for the Organisational Clogging symptom in the Prefilled Problem Picture Analysis Map. 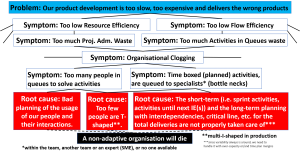 From beginning Toyota developed an anti-clogging system for their plants, to not be clogged by inventories, tools, etc., which is waste, and they thereby left the era of mass production.

If we look at the root causes for Organisational Clogging and since Lean Production is aggregating with experts at every process, it has mainly the bad time planning root cause in focus, that we ended up in regarding the queue symptom in this earlier blog post. And as we have shown earlier with their different buffers as margins to ease the effect of variability in the different domains in the Cynefin™ framework, Lean production handles the time planning root cause extremely well. Here is the picture from this blog post stating Overlapping Concurrent Disciplines, on how the processes are connected. 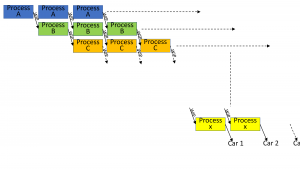 But, many years ago, Toyota found out that they come to almost a dead end, regarding their waste reduction, and needed to think differently, and started also to concentrate more on too many people in their plants. Too many people is part of what Toyota calls, Excessive Production Resources [1],
which Toyota primarily looks at. Always.

This means that Toyota has continued their Lean journey and changed Ohno’s 7 waste from 1978 [1] to only 4 waste in 2012 [2], which means that Toyota are taking care about our bad planning of the usage of people root cause. The reason for their change is the difference between anti-systemic* and systemic waste, which in short means that even in aggregating work, continuous improvement** only looking at symptoms will finally give sub-optimisation.

Toyota’s solution to this root cause has been to introduce multi-functional workers (multi I-shape), especially to handle ups and downs in production quantities, but at the same time of course also to increase the flow efficiency, quality, morale, as well as reduction of heavy work with muscle-, back-, and finger strain, etc. Toyota’s perseverance in improving systematically (methodically) has resulted in a production system copied by all other car manufacturers. The more different processes the workers can handle, the more flexibility can be achieved. This is also connected to a career ladder at Toyota’s factories.

Multi I-shape means the ability to handle many different processes, but is not the same as T-shape needed in product development, due to the many interactions when solving problems, resulting in activities with interdependencies. But, of course over time, the multi I-shape workers’ T-shape will increase, making them very good problem solvers also regarding the interface problems between the parts, that can be Complicated or even Complex problems.

Next blog post will continue with another anti-clogging-system at Toyota and the turn then goes over to Lean Product Development.

**remember that on the whole only continually improvements can be done, due to the synchronisation needed between the parts when the respective part’s improvements are executed at the same time, for example takt time change. The parts can (and must) themselves be continuously improved, as long as they do not affect another part.