Here is our total picture of the chains of symptoms for the Organisational Clogging symptom in our Prefilled Problem Picture Analysis Map. 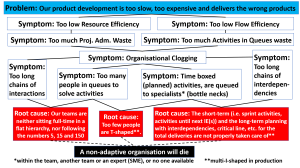 Next “chapter” according to the Reading proposal tree is The continuation of filling in the Prefilled Problem Picture Analysis Map.