But, it has unfortunately too many times been misinterpreted. What it states is that only management can change the system, and that is because they are the owners to the processes of the system. But it does not state that management themselves necessarily understands what changes to do on the system to make it better, which is the misinterpretation of the quote. If we misinterpret this, it will give us a reason for not listening to our people raising way of working issues on the whole, leaving them to only improve within the team. The misinterpretation can be of two main reasons;
1) Management really think they know better or
2) The implementation of a new method or framework is not understood by management and can therefore only be executed exact as it is prescribed.

The former of them is probably not so common in organisations, especially not for product development, but the latter is scary, since then the organisation is out of control of the transformation to a new method or framework. This also means that the transformation of the organisation’s way of working most probably is controlled by external consultants sometimes most of the times without any knowledge of neither the organisation’s domain, nor context. And as we understand, now it starts to get really scary, with extremely high risk that we do not listen to our people when they are flagging for problems, or issues that the new method or framework cannot solve, especially on the whole. The risk for disrespect of people within the organisation is very very high and even more if we have a transformation that is behind schedule, making raised issues on the whole to be neglected and swept under the carpet, due to lack of time.

Common sense: It is good to involve our people in the wholeness, especially in a big organisation where it is easy to lose the Big Picture, but not everybody need end to end knowledge 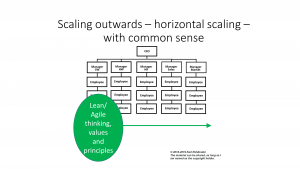 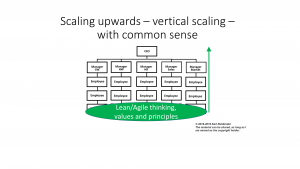 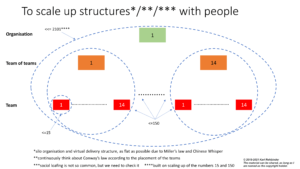 As last words in this series, it is important to state that the number one common sense to start to follow is of course Respect for People and if we lack that, our organisation is in deep danger. And as we also stated, listening to our people when they bring up problems and also taking care of the problems, is very important, since problem-solving in our products as well in our organisation is another very important common sense. So if we not respect our people, it has high risk to lead to that we cannot solve our organisational problems, meaning we are once again in deep danger. As we see, these two common senses are closely related to each other and disrespect of people, too many times makes the organisation become stalled, unable to solve its organisational problems, which Deming pointed out time after time. And when we get our common sense suppressed we are in even deeper trouble, since Respect for People is then impossible to achieve This is due to the increase of problems, the increased number of unintended consequences, since the suppressed common senses lead to that severe problems that our people flag for, are surpressed and therefore never solved.