This series of blog posts will elaborate on some of the methods in the list of managers’ panaceas [1], that Dr. Russell Ackoff [2] brought up in the middle of the 1990s, when he also stated the differences between solving and dissolving* a problem [3] [4]. Dr. Ackoff was a pioneer in the field of operations research, systems thinking, management science [5], even though he resisted the confinement of his work to any particular methodology, especially due to the changes of the field of operations research, becoming more theoretical than practical [2]. He can also be seen as a pioneer in the early beginning of complexity theory, not to be mistaken for systems thinking, or as Dave Snowden acknowledges Ackoff’s part of complexity theory [6]; “Ackoff I think was one of the greatest of the pre-complexity thinkers and would have said different things if he had known the science – but he is part of the heritage.”

Dr. Ackoff’s position was that the methods in this list all have something in common. This due to their bad performance reported for most of them in national surveys done among US Corporations in the beginning of the 1990s [1]; in his own words: “For most of them there have been national surveys conducted within the last couple of years, in which the managers responsible for adopting them had been surveyed, to determine whether they were satisfied with the results”.
He claimed that they were antisystemic** [1], sub-optimising, where the latter is a word more commonly used today. Now you have been kept waiting for Ackoff’s list of managers’ panaceas a long time, so here are the methods that come off the top of his head:

Since many of the implementations of the methods had been a failure in the range of 50-75% in the US in the early 1990s, reported in the national surveys, Dr. Ackoff explained his thinking like this [1]: “Now, when you take these one by one and go through them, it begins to strike you that maybe the errors that have been made is, in some sense, common to all of them and not distinctly associated with anyone of them. And that is the position I wanna take tonight. Obviously, there is nothing wrong with quality. Quality is a good thing [7][8]. It must be something wrong with the way people are trying to pursue it. And similarly, with redesign of processes, it’s nothing wrong with that. It must be something about the way people are going about doing it, and that is the case I believe. And what’s wrong is that the efforts are antisystemic.”

Some years later, he followed this up in an biography article [3]; “Most panaceas fail because they are applied antisystemically. They need not be, but to do otherwise requires an understanding of systems and the ability to think systemically.”

Here is some another way of putting it by Dave Snowden, when we are trying to isolate parts of the system in order to try to understand it; “We understand situations by making creative, but simplifying assumptions about the levels of structure that we are considering. We define a system and its boundary and then make some assumptions about the “components” or “agents” that inhabit it, and whose interacting behaviours will “explain” the behaviour of the system over time. But of course, this assumes temporal stability of the entities that we observe, and the acceptance of some rules of classification (a dictionary) that defines the different types of thing that are present. In reality, over time, as a result of evolution these elements may change and new ones may appear. The amazing thing is that we seek to “understand” a system by reducing its operation to some set of interacting things that in themselves do not change.” [9].

As you all can see above, this is an impressive list of famous methods, many of them still implemented today. And of course as Dr. Ackoff states, quality and removal of waste by redesigning processes are good things. But, given that Dr. Ackoff is correct, we can also understand the following; the methods are easily sub-optimising when implemented. This means that the implementations most of the time are a waste of time and money for the companies trying to implement them, since we simply don’t know from start if we are going to be successful or not. In the view of the very high failure rate in the surveys, with not even a 50/50 chance for success, our odds for success is alarmingly bad,

As we have stated earlier in several blog posts, asking multiple why on one and each of the following symptoms that characterize an inability to meet the market; why companies are too slow, why the products are wrong, why the quality is bad, why we are inflexible, etc., are the most important questions to ask first, before implementing any new method or strategy. By asking mulitple why, we will finally end up with our root causes, our negated principles, which in turn are built on our evolutionary prerequisites as a specie for solving problems. By also solving the root causes, we are at the same time dissolving our organisational problems one time for all, meaning we are acting systemically. A great help for finding the root causes to our organisational problems in any existing organisation is our Prefilled Root Cause Analysis Map, that looks like this: 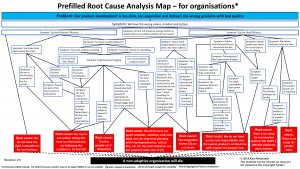 In the 1980s and 1990s and still today, most of the organisations had the silo structure and many times, especially regarding product development, the work was done in projects with the waterfall way of working. The KPIs per silo, gives a sub-optimisation regardless if projects are used or not, that with Technology Push at that time could work okay, see this blog post. But the market changes from then until today, requires more speed, complexity and flexibility, which makes this setup impossible. The following picture illustrates the pain points of silo organisations due to their corresponding unsolved root causes, and will be the default picture when comparing what each method aims to solve, but instead maybe only sub-optimising. 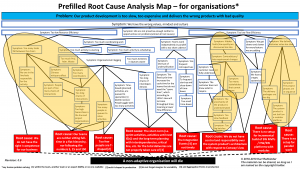 Without going into details, the left pain point in the picture is the inability to work faster due to that the current processes are setup per silo, making the interactions between the silos difficult, whereas the right pain points are more about too big work packages and the inability to solve complex tasks.

In the coming blog posts in this series, we will go through most of the methods**** and see what problems they are trying to solve, how they are trying to solve it, and if they are sub-optimising, and in that case why. And if they in some cases can be less sub-optimising. By this elaboration we can find out regarding Dr. Ackoff’s anticipation about their antisystemic effects. At the end of each blog post it will be a conclusion, and in the final blog post there will a grand summary of the whole series.

And for each method, the method will of course be briefly presented first, so for each of you that also would like to get an understanding what the methods are all about, this is an excellent opportunity to get that summary in one Place only.

But have in mind that with our principles fulfilled, we have achieved System Collaboration, which means that we are beyond Best Practices (and Good Practices too), since we are acting fully systemically. To be beyond Practices means that we do not need comparisons between any companies with success or failure having implemented the same method, we just need our organisation to fulfil our principles, making every implementation individually easy, but unique. This leads to that we do not need (or can have) one single company for comparison, we frankly know that if we follow our principles, we have reached the park, for our organisation.

This is disruptive and may feel scary. But, in order to decrease our nervousness, we take Toyota as an example, that started from zero in the 1950s and that has been successful, with both quality and redesign of processes, that Dr. Ackoff mentioned above. And we choose Toyota as an example not only because of their success, but above all for this reason, stated by the father of the Toyota Production System:

Thus, since the Toyota Production System has been created from actual practices in the factories of Toyota, it has strong feature of emphasizing practical effects, and actual practice and implementation over theoretical analysis.

Toyota has not used theories or a specific method and therefore not Best or Good Practices and still become successful, with a never-ending perseverance. This makes them a good candidate today for truly acting systemically, and therefore maybe have no need of implementing any method in the list. Let us therefore look into this, and then not only for their production part, but for their product development as well, where it is even more difficult to act systemically, due to the higher uncertainty in non-repetitive work.

During our dissecting of the methods, I will do my best to be a fair judge. Here is our starting position.

**Do not mix antisystemic with non-systemic. Non-systemic means that there are no side effects. A good example where there are only antisystemic cures, is medicines taken orally trying to cure a symptom in the body. This is because the body is a complex system as well, which means that no symptoms in the body can be cured without effecting parts of the body with side effects. Instead the root cause(s) to the symptoms need to be found. The same goes for our organisations, they are complex systems too, and only the root cause to the symptom can be cured, since trying to cure the symptom means more unintended consequences, i.e. more other symptoms, that can be hard to foreseen and never directly cured either.

***it is interesting that Ackoff mentions quality and redesigning the processes, which are both taken care of at Toyota. It will be even more interesting throughout this series, I promise you that.

****only in the combination of; there is information about the method and the method is used today. But I promise I will dig deeply.

[7] Jobs, Steve.  Interview with Steve Jobs, “Steve Jobs on Joseph Juran and Quality”. Link copied 2018-12-14.
https://www.youtube.com/watch?v=XbkMcvnNq3g
“Joseph Moses Juran was like Edwards Deming in Japan from the 1950s and learnt them quality, due to the uninterest from their own home country for several decades, which changed in the 1990s”. This depending on the dominant predator theory, as Dave Snowden would have put it, and the different continents made the chasm enormous. This made US really late starting up with quality work, where they still today are chasing Japan.

[8] Deming, William Edwards. Biography. Link copied 2018-12-14.
https://en.wikipedia.org/wiki/W._Edwards_Deming
Edwards Deming was like Joseph Moses Juran in Japan from the 1950s and learnt them quality, due to the uninterest from their own home country for several decades, which changed first in the 1990s. This depending on the dominant predator theory, as Dave Snowden would have put it, and the different continents made the chasm enormous. This made US really late starting up with quality work, where they still today are chasing Japan.