This blog post will dig into Lean/Toyota Production and its way of working to handle the variability, with the help of various buffers, one of them called WIP Inventories. And once again we will do it with the help from the Cynefin™ framework, so we understand the context and the context switches, since we need to know in what domain we currently are in; Complex, Complicated or Obvious.

Before we go into any details, the Toyota Product System can be considered to be using three different kinds of pull and push approaches: 1) push; when from current monthly demand calculating the takt time in the plant, 2) pull; when using the Kanban system, derived from the supermarket model, for pulling in the needed parts to the split lines and 3) Just-In-Time (JIT); for the split lines, using the calculated takt time and also buffers within (under-utilization) and between (for example WIP Inventories) the processes to be able to directly take care of production problems, in order to achieve highest possible quality that Toyota is aiming for.

Aggregated work can be 100% in parallel, with for example aggregating of many cars att the same time at parallel assembly lines, since it is actually no dependencies between the respective assembly lines. But, the biggest problem with this is that the each of the processes need to be duplicated, which is very wasteful. Another problem with this is that the variability for sure will make many cars to be finished at the same time, which can be a problem for next process in line that takes care of the produced cars. There is also a big risk to not take care about quality issues directly, so the risk is that material, unfinished sub-products, faulty products etc. will clog the plant. Toyota’s focus has always been on the quality and is so today and will be so also tomorrow.

So, the problems with parallel assembly lines have been taken care about in Lean Production, which has been brought up in details in an earlier blog posts discussing Sequential or Parallel work – which is best?. Toyota Production can be seen as sequential work done in parallel with several hundreds of different tightly connected processes, which we already have referred to as Overlapping Concurrent Disciplines in the above mentioned blog post. It looks like this. 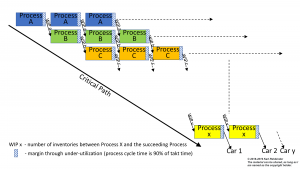 The different colours represent an I-competence or an process/expert, which is only used one time for every takt time. After each process* in the line there is a WIP inventory number x (buffer) of parts from process X, which depends on many things, but mostly how frequent the process has internal problems.
Note! Since takt time** is used on the split lines, these processes are refining their respective part simultaneously. This means that each WIP inventory buffer x (can be considered as a FIFO queue) is constant; when process A has made its refinement to be continued by Process B, Process B at the same time takes the next part in the FIFO queue of refined parts from process A, meaning one in and one out at the same time in all the different FIFO queues between the processes. All this together shows that the Toyota Production System is a push system to set the takt time and then a pull system with just-in-time due to the takt time in the split lines. Deliveries of parts to the split lines are done with the Kanban system, invented by Taiichi Ohno, and is built on the “supermarket model”.

But, how about the variability? Variability will of course always be present, even if the work is repetitive and Toyota Production has the following solution to this, to achieve high Flow Efficiency [1] regardless the domain; Obvious, Complicated or Complex:

As you already understand, when buffers become empty between two processes, or between two split lines, the subsequent process or split line will stop. And because the Andon system is activated more than a half million times per year in a big Toyota plant, the buffers in the split line will go empty several times per day. But, despite the delays the small buffers cause, it is very important that the buffers are small, since small buffers reveal quality issues fast and will in the end also secure Flow Efficiency, both are tightly connected. And to decrease the WIP Inventory to create a very tough situation in order to motivate people, was also Mr Taiichi Ohno’s aim.

Now we know a great deal about WIP inventories in Toyota Production. In the second next blog post, we will look into Agile development, where the use of WIP Limits is very different from WIP Inventories in Toyota Production. Unfortunately so different and instead used for trying to cure a symptom, which means that WIP Limits actually are sub-optimising the organisation.

But, come so far with our System Collaboration understanding, we already have the knowledge that we need to ask why first, sometimes multiple times, to be able to find the root causes in our Prefilled Problem Picture Analysis Map, our root causes that are our negated principles for a flourishing organisation. And when we have found a root cause, we already know the solution. And that is what tomorrow’s blog post will be about, and we of course take help from our Prefilled Problem Picture Analysis Map.

**at p 15 in [1], “The necessary output per month is predetermined from market demand.”. At page 16 in [1] “Late each month the central planning office conveys to all production departments the required quantity per day and the takt time for the following month. This process is characteristic of the push system.”.

***the WIP (Work-In-process) Inventory is needed depending on three items; defective products, setup time of a machine, and machinery break down. This means that the Toyota Production System is a One Piece Flow with buffers (Inventories) within (in process) the processes or/and between the processes and also between the split-lines**.

****from [1], ch. 28, p.463-464
“The Toyota Production System has never been a non-stock, zero inventory, or stockless system, although some writers erroneously characterize it as such. The information provided in this chapter clearly illustrates this point. The Kanban system requires a specified amount of inventory at each preceding process store so that subsequent process carriers may take the parts with their withdrawal Kanban and empty parts boxes.
At Toyota…… Since buffer stocks kept in the storage points between split-lines prevent the entire assembly plant from stopping, they are quite necessary and are not considered waste.”

*****but also the possibility to easier change the number of workers within a process by re-allocation, when the production demand goes up or down, see [1] p 16, “… the manager of each process will determine how many workers are necessary for his process to produce one unit of output in a takt time. The workers of the whole factory then must be repositioned so that each process will be operated by a minimum number of workers”. This is very important to be able to achieve full-time workers and avoid idle time, which Toyota regards as the worst waste, and the first to look into, see [1], page 5. And to achieve full-time workers the workers need to have multi-I-competentce, so that they can be exchanged within and between the different processes and split lines. Multi-I-competence is also one of Toyota Productions different career paths.