This is part 5 of the series of blog posts that is elaborating on some of the methods in the list of managers’ panaceas [1], a list of anticipated antisystemic (sub-optimising) methods that Dr. Russell Ackoff brought up in the middle of the 1990s. Today’s blog post will dissect Process Reengineering, or Business Process Reengineering [2] as it is more commonly named today, but it involves all related methods that is focusing on process rationalisation and automation*.

Specifically, the national surveys from the beginning of the 1990s, that Dr. Ackoff referred to, was with his own words regarding Business Process Reengineering, BPR [1]: “Nobody has reported the percentage, but the indication is that somewhere around 3/4 of the cases of Process Reengineering have increased cost, not reduced them.”. The 1994 CSC Index “State of Reengineering Report” had one supporting answer; 67% were judged as producing mediocre, marginal, or failed results [3].

BPR emphasizes on systemically thinking and seeks to redesign an organisation’s business processes and is making process maps to achieve a defined business outcome, by a full-scale approach rather than an iterative one, like PDCA or DMAIC cycles.

And every method gets its criticism, and the same goes for BPR, and all the related methods that is focusing on process rationalisation and automation, and since the employees many times were not taken into account, it brings the thoughts back to Taylorism.

Michael Hammer stated in an HBR article already 1990, “Reengineering Work: Don’t Automate, Obliterate” [4], that the companies cannot automate a bad system, which Deming also is very clear about [5], which many U.S. companies then have tried to do for a decade and he states; “The usual methods for boosting performance—process rationalization and automation—haven’t yielded the dramatic improvements companies need. In particular, heavy investments in information technology have delivered disappointing results—largely because companies tend to use technology to mechanize old ways of doing business. They leave the existing processes intact and use computers simply to speed them up.”

Hammer’s former colleague Thomas Davenport blamed in a Fast Company article 1995, “The Fad That Forgot People” [3], BPR’s negative press on the excessive power given to third-party consultants who were primarily interested in cost savings and did not have an emotional investment in the Company, which led to that BPR in the end of the 1990s had been synonymous with Downsizing**/*** and Outsourcing****. Davenport stated “For technologists, the lesson from reengineering is a reminder of an old truth: information technology is only useful if it helps people do their work better and differently. Companies are still throwing money at technology – instead of working with the people in the organization to infuse technology.”.

John Seddon has been on the same path also for a long time, specialised in changes in the service industry, and he firmly states that IT should not be involved until a system running manually is working first, where the waste has been removed, before any technology capabilities are brought in [6]. The risk is also very high that a pre-made IT tool is introduced, that the employees need to adopt to, making the way of working even worse. So, we need to be very careful about the digitalization, since digitalization made on a badly functioning system or subsystem needing many workarounds to achieve progress, will suddenly remove the workaround possibilities for the employees, when the processes are digitalized exactly.

Dave Snowden also puts a warning finger regarding BPR and complexity [7]: “However the essence of organisational work is to live with and embrace ambiguity and uncertainty. An over case based approach with too little experience can lead to that essential ambiguity and uncertainty being disguised or ignored. A lot of that went on during the BPR days …..”

This criticism is still valid today, when there is an even bigger and faster growing belief in that new technology and software will make everything more efficient and effective, where the last trend is Digital Transformation. But, if the system is bad from start and strongly antisystemic, new methods built on old thinking can never help us. Quoting Einstein:

Without changing our pattern of thought, we will not be able to solve the problems we created with our current patterns of thought.

And the “vertical” layering of our organisations in silos, measured by KPIs, means that we are trying to optimise on the parts, which inevitably leads to sub-optimisation. And since we cannot solve this problem without new thinking patterns, BPR which is optimising processes that are on “vertical” and/or “horizontal” process layers, will not help us, it is still an antisystemic approach, that is not solving the root causes.

Toyota did from beginning choose the PDCA cycles for their continual improvement of their processes, an iterative approach. Since they now also are acting systemically both in production and product development, their processes are well-oiled and there is no need for any transformation to something else, especially not an antisystemic method.

Conclusion:
Optimising the parts/layers will only sub-optimise on the whole, the same as trying to solve symptoms will. BPR is no exception, even if the intent is to be systemically and to make a full transformation and not iterative as in the PDCA method. But, only by solving the root causes to organisational problems is to act systemically, so the only way to be successful with a BPR implementation is that also systemically changes are done in parallel, intended or unintended. This lack of systemically understanding and acting are the reasons for the bad results of BPR implementations.

Regarding BPR put in our Prefilled Root Cause Analysis Map, BPR is trying to close a gap and fix vertical and/or horizontal process layers of the organisation, without caring about the way of working for the employees. But once again, we still need to solve our root causes to act fully systemically without risk for sub-optimising effects. At the same time we will indirectly also take care about our people and they will flourish, due to the fact that the principles are derived from our evolutionary prerequisites as a specie. Here is how BPR will look in our map with its sub-optimising areas: 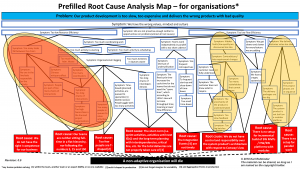 In the next blog post we are going to dissect the next method in the list of managers’ panaceas; Learning Organization. C u then.

*there are many different methods and disciplines, sometimes under the overall term Business Process Improvement (BPI); BPR, Six Sigma, Lean, TQM, Business process management, Business process redesign, Business transformation, or Business process change management etc. Most methods are derived from Systems thinking/System dynamics, all with the aim to think systemically, and are trying to close the gap to an ideal future state, which Dave Snowden often refers to as methods that cannot handle complexity.

**euphemisms like “downsizing” are often used to indiscriminately fire employees.

***Downsizing [1], is one of the methods on Dr. Ackoff’s list, and here is his own words regarding the national surveys done on Downsizing; “Downsizing – more than 75% of the Downsizing efforts have resulted in increasing cost.”
A report from Stockholm school of Economics, “Vad kostar en personalneddragning?” (What is the cost of a Downsizing?), 1999 by Collin, C, reports about the hidden costs at layoffs and mentions specifically; less trust, powerplay, conflicts, role changes, unclarities, learning of new competences, passiveness, low performance due to anxiety, distancing, focus shifts from work to the individual’s future, etc. , which results in the following effects; productivity loss, quality defects, customer impacts, loss of interrelationships in the network and less innovation.

References:
[1] Ackoff, Dr. Russell Lincoln. Speech. “Systems-Based Improvement, Pt 1.”, Lecture given at the College of Business Administration at the University of Cincinnati on May 2, 1995.
The list at 03:30 min and the national surveys about Downsizing at 04:25 min and Process reengineering at 04:38.
Link copied 2018-12-23.
https://www.youtube.com/watch?v=_pcuzRq-rDU