This series of blog posts will elaborate on transformations and changes within organisations and will cover the common sense regarding why the changes are needed, what to think about, and what to be vigilant to. The common sense will be separated in two parts depending on scaling, where we will start with common sense that we have regardless of scaling or not. Both parts will also be divided into a common sense of free will, and a part where our free will is strongly affected by external forces wanting us to ignore our own common sense. The latter is of course scary, but unfortunately not uncommon. Every blog post will consist of some different common sense.

But, first of all we need to go through what is meant by scaling, since there are three common meanings, which we need to understand, since they are all important when transforming organisations to go agile.

We have horizontal scaling (scale outwards), which means that we for example already have agile software development, and we need to scale agile to the other silos within the organisation. 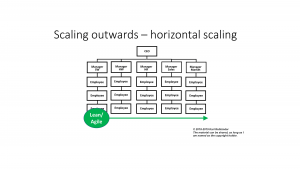 The second one is vertical scaling (scale upwards), which means that we scale upwards through the whole organisation up to and including the top management. 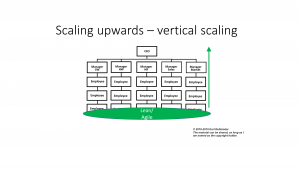 The third one is when a product is large and need team of teams or more levels in order to be able together to develop the different parts of the product. Between the parts there will be many interdependencies, that implies interactions between the teams. This implies that a systems design is needed first in order to get these parts, that later not only will fit together as when integrating, but also will integrate to a unified whole. 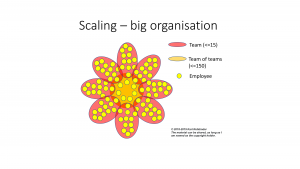 But even though this is the common different meanings when we are talking about scaling, we still need to be vigilant, since a top-down approach is needed, especially in big organisations and big products. It will be clearer throughout the series, and summarised in the last blog post of the series.

Common sense: To even be able to solve our organisational problems, we first need to start asking ourselves why we have them

Why do organisations of today do changes at all?

Here are some of the most common reasons:

But, no matter why these changes are done, there must be problems initiating the changes. This makes the first one above to be the clearest example of changes needed to be done because there are problems for the organisation to be efficient or effective, or both in today’s market. This means that the organisation tries to change the organisation in order to solve their problems, which of course always is easier said than done, due to the complexity we have in our organisations.

The second bullet above is trickier, since here we talk about an introduction of a new method or framework in the organisation, that states that problems will be solved, but not stating or trying to find out that the organisation’s problems really will be solved, or if the method actually will introduce new problems. The method is stated and commercialized as a one size fits all. But, hey, you say, it is not possible to copy some other organisation’s way of working or a method or framework directly according to complexity theory [1], and of course you are right. So, in this case we need to be vigilant.

The third bullet is close to the second one, but not exactly the same. This is about to follow the overall fashion on the organizational way of working market. This is even more about copying since a recipe is followed. Here we need to be extra vigilant when the recipe cannot explain why (down to the root causes!) the old problems will vanish, meaning it cannot explain the science behind the method or framework. Most of the times there are no explanations, only a focus on counterfactuals instead, and by doing that, keep the back “free”.

As you understand, these three bullets above all points out that we need to understand our organisational problems first, before we do any changes at all, since copying someone else’s way of working or framework directly, is not possible. And it does not matter if the copying is done from another company’s way of working or from within our own company. What matters is that context is almost always someway different, which makes copying impossible. One of Dr. W. Edwards Deming quotes [2] is apt here:

To copy is to invite disaster.

Also, these words from Dave Snowden [3] are valid:

Don’t copy from one context without knowing
(i) you have a similar context and
(ii) understanding why it worked in the first place.
Not much survives this test…

So, the above elaboration gives understanding why this is a common sense, since we can never solve symptoms, only root causes. We can never directly solve the problems that we see and suffer from, no matter if it is product, service or an organisational problem. Instead, we need to ask why to be able to reach the root cause, which normally requires many why questions, otherwise the problem-solving is too shallow and we will only try to solve symptoms.

And if we think about it, this is a big problem today, when we introduce new methods or frameworks that, since they never ask why on the original problems within the organisations, that they are claiming that they will solve. The reason why we come on the wrong track and missing to ask why, is that complex presentations are perverting our mind, backed up by statements like; there is no simple solution to a complex problem. If we think about it, the statement is correct if we do not ask why on the problem, since then the problem is an insolvable symptom. And solving symptoms, means no solution, which indirectly means that the claimed solution will only look extremely complex trying to take care of endless new symptoms, but still, it is not a solution. But, if we ask why and find the root cause(s) to the original problem, there is no proof that anyone of the root causes’ respective solution is complex, rather the opposite. A deep dive into problem-solving and how to boost your problem-solving ability, can be found in this series of blog posts.

Let’s now go through some common senses where scaling is not making it more difficult.

Common sense: Respect for our people is always needed

Respect is always needed all over today’s organisations, in order to have a healthy organisation, making the organisation long-term successful. Most of the organisations have respect as a value word, but still, some of them are failing to live up to it, but unconscious about it. There are of course many examples of this, but one them that is now fast establishing as the number one disrespectful manner, is when new methods and frameworks are introduced.

Why? The reason is that the team members consider only the way of working within the team, but not the wholeness, since the wholeness is left to the framework and the leaders outside the teams to take care of. And if from beginning no why has been asked on the problems of the organisation, this means high risk that the new method or framework tries to solve symptoms, which we already stated is impossible. Many of our people will see this and raise questions about problems not handled by the new framework. And if the leaders outside the team only looks at the rules of a descriptive framework, these appropriate questions may not have an answer within the framework, and will be dismissed, or parked to later be forgotten as well. This has nothing to do with that some people are reluctant to the change, rather that the changes are not solving some problems, or worse, adding new problems as well. This is also in line with Mats Alvesson’s and Andre’ Spicer’s research, that they have summarised in their book “The Stupidity Paradox: The Power and Pitfalls of Functional Stupidity at Work” [4], pointing on many different reasons why people tend to think only within their own box (their function/discipline) and not about the wholeness. This means that people only think within the processes within their discipline and not transdisciplinary. What all people in the organisation is doing is seen as good, natural, and goes without saying, there is therefore no reason for questioning it.

Mats Alvesson continues that functional stupidity is also always a positive short-term loop, that most people like, I do my work within the specified processes, no one can complain if the rules within the discipline are followed. There is no implications-thinking; if I do follow the current processes, practices and rules, this is what will happen for the next person, but is it good? But functional stupidity also means no reflections on why should we work in the way the processes are, what are the arguments for the current processes, more than that they are written the way they are. There is neither reflection on where the processes, practices and rules are actually not followed and reflect and raise questions about that, instead you keep quiet. If the wholeness is not working or not, is never considered.

There is also a positive-thinking phenomena, the positive culture phenomena, always positive to everything, meaning that if you raise organisational problems you are seemed like a negative person. This also yields organisational misunderstandings about something, where continuous improvement is a good example, because wrongly implemented it is only crap, But if you question it, you will be stated as a person that think that continuous improvements are wrong per se. But, even if something is repeatedly stated as having universal validity, it does not mean it becomes a truth, if it from the beginning was a false statement in other contexts. It is easier to follow everybody else, follow the stream, because it can never be questioned. So, instead of problem-solving, positive thinking talks about what you want instead, the effects. This means that the problems are wiped under the carpet, and instead success achievements are in focus, but no one asks how to get there, how to achieve them.

What happens today in our organisations, also in the public sector, is that too much focus is put on the leader of the organisations, which Mats Alvesson points out, in this article in the Dagens Nyheter newspaper from 2019-08-11 [5]. And as we also know by this time, symptoms are impossible to solve, meaning that leader educations can never be the solution. Dissolution of our organisational problems, is the only way to get rid of the root causes to organisational problems, meaning fulfilling the principles regarding our cognitive abilities. This is further examined in this series of blog posts.

This new kind of disrespect when introducing new methods and frameworks is already today a big problem, and will increase tremendously. This due to that many times new frameworks are introduced in a company due to that the competitors have done it, as Jan Wallander brought up decades ago. The only reason for a change initiative introducing a new way of working must be to solve the organisation’s current problems within its own domain and the domain’s different context. When the focus for a change initiative is to introduce a new method or framework, instead of focusing on the problems within the organisation, the organisation is risking its own future.

This was all for today’s blog post. C u tomorrow again for a continuation of common sense that is depending on scaling or not.

[1] Snowden, Dave. Blog post. Link copied 2019-09-05.
“The essence of interventions in a complex space is that you get the system to model itself, you don’t (unlike systems thinking) attempt to model it.”
https://cognitive-edge.com/blog/thoughts-on-models-and-modelling/