Welcome to the third part of this series. Today we are going back to the supplier, that on request from our engineer started several analyses on different products they deliver to the engineering department, in order to go down to the roots of the problems.

The supplier started with a traditional analysis to find the root cause(s) to the problems with the fuse, and could after several levels of why find a problem with their own test equipment in the production test that allowed fuses outside the specification erroneously to pass the tests, even though the bad fuses were very few. The supplier also updated the calibration interval to be sure that this was not going to happen again. The scenario for the fuse looked like this. 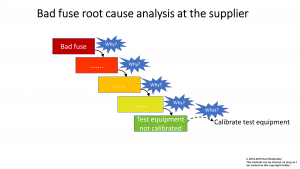 The supplier continued with a traditional analysis to find the root causes to the oil problem, and could also here find some parts that could be made better. This time a test case has been missed in the design tests, making the oil unnecessarily close to the acceptance level of the oil, which long-term needed to be corrected. The scenario for the oil looked like this 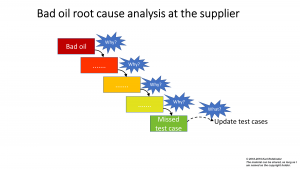 When the supplier continued with their third analysis, the one regarding the pump, they found a small error in the requirement specification of the pump that needed to be updated and then later produced. The error was only minor, so no pumps needed to be changed at the customers or in current production or delivery chain. But the supplier was happy to found this problem, since later updates of the pump should have been negatively affected of this error. The scenario for the pump looked like this: 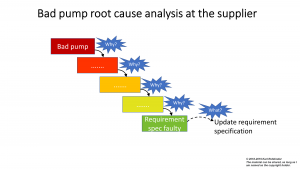 The last analysis of the scrap metal prevention system, to find the root cause(s), resulted in that the requirement system had been misunderstood by the design people, so the design of the pump was erroneous. But the error was only that the pump was over specified and unnecessarily expensive. Once again, the supplier was happy to find the error, since the next release of the design specifications would be updated and that in turn would reduce the production cost for the pump with 6%. The requirement specification was also updated to make it clearer in order to avoid misunderstandings in the future. The scenario for the scrap metal prevention system looked like this: 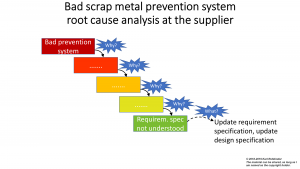 This was all for this blog post and tomorrow we will continue to ask why, in order to reach the organisational level, a very important step, but unfortunately commonly ignored.