Now we are going to dig into the first part of our start organisation definition “People that interact to solve activities with interdependencies to achieve the purpose.”, the people side.

We continue to use the silo organisation with projects as an example, since it is very easy to understand.

Before the introduction of the projects in the 1950s, the silos in an organisation were quite isolated, but within the silo there was collaboration with a lot of interactions to solve their activities with interdependencies. So, when the time changed, it was not easy for the resources within all silos to collaborate to make a common system product. In an earlier blog post “People that interact” has been referred to as Boats, which will be continued here. 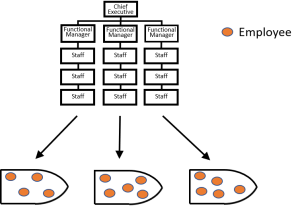 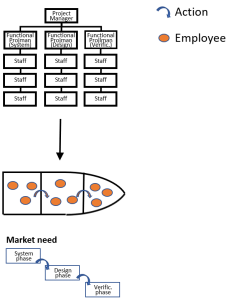 Now our people are put together in a cross-functional manner and the collaboration is easy, since the hand-overs between the sub-projects are easy and well specified. With Technology Push this works fine.

But the need for speed put the organisations into trouble again, since their adaptivity were limited, making the bulkheads between the teams from different silos hard to force. Instead the organisations try to shorten the pre-study phase, shorten each execution phase, or even put pre-development in the Project, to be able to meet the market need, which instead resulted in a longer Project because of the bad preparation and/or non-realistic time plans. 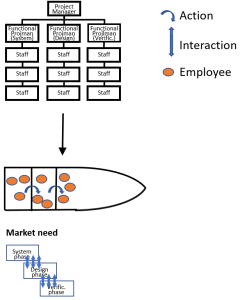 In the next blog post, we look into what happened with our interaction possibilities when the market’s need for speed increased even more.