Let us look into the last part of the start organisation definition, “activities with interdependencies”, which we will call Queues, where more information about different kinds of queues can be found in this blog post that elaborates on queues. The silo organisation with projects is only used as an example, since it is very easy to understand. 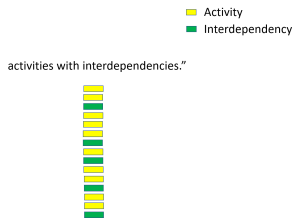 Already in ancient times humans understood that chains of activities needed a certain order when they had dependencies between each other. And when a team of people take care of one activity, and break it down into smaller activities, they understood that they need to solve the interdependencies within the team. This is similar to a silo organisation with waterfall way of working, where each silo works in a consecutive order with dependencies between each other to solve the total deliverable, but where each silo solves its own interdependencies to make their sub-deliverable.

In the Product-oriented processes in respective silo, it will be stated how to handle the interdependencies so that the silo’s sub-project can solve its activities. The Project management processes will at the same time take care of the dependencies, the handovers between the sub-projects, or phases.

And as stated before, as long as the market is happy with Technology Push and the market does not need speed, this is actually a very good way of working for many companies. It only requires planning so that the projects overlap. This can be illustrated in the following way. 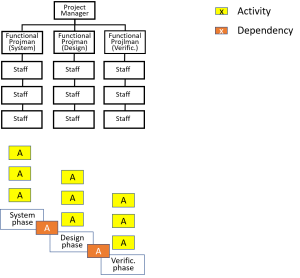 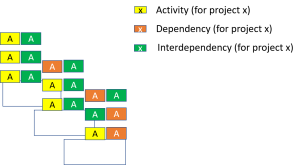 And the more we work in parallel and the more teams that work in parallel, the more interdependencies we will have. If nothing is changed in the current way of working, semi-parallel working will fail very fast. Another important aspect is that the gates for getting money when a phase is finished and next to start, is not fulfilled, which also becomes a major hiccup.

In the next blog post we look into fully parallel work and also with iterations to gain knowledge when we have uncertainty. After that we wrap up the “activities with interdependencies.” by stating our found principles in a final blog post in this subject.